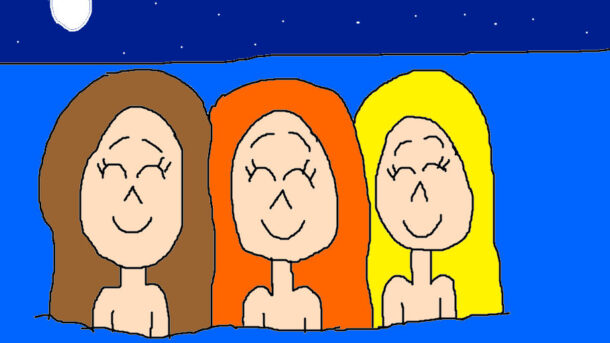 School had just let out for the day, and as I was ready to start my walk home, I saw several of my friends having an earnest discussion.  As soon as I walked up to them, Donna turned to me and said “We’re thinking of renting a cabin for a week as soon as summer vacation begins.  Want to join us?”  Of course I wanted to join them!  Donna continued, “I’m pretty sure my Mom will be our chaperone.”  I can’t recall exactly what assurances my parents needed regarding competent adult supervision, but my mother probably spoke with Donna’s mother before saying I could go.  For the next several weeks, the upcoming trip was all we girls talked about at school.  After an interminable amount of time, summer vacation finally arrived.  We would be going to Moonlight Park, which was just outside of town, and Donna’s mother and father would be in the cabin with us, her father commuting to work each day.  I’d never heard of Moonlight Park, but as soon as we arrived there, I recognized it as the place with the swimming pool where my Dad had taken my sister and me many times.  New management had built the cabins and turned our favorite swimming hole into a resort known as Moonlight Park.  The pool was small, with lots of inlaid rocks giving it a rustic look.  To six teenage young ladies, this was paradise.

The cabin consisted of two rooms, a bedroom that was claimed by the two adults, and a large room that, after we set up our six cots, became the kitchen/living room/dormitory.

Most of our days were spent at the pool.  Much of the time, we were the only ones there.  On one occasion, though, while I was sitting by the pool, chatting with my friends and trying to get a tan, one of the girls said “That guy over there just took a picture of you.”  Those were innocent times, so we thought nothing of it.  When we weren’t at the pool, we would spend our time playing games and reading.   We’d discuss and share our books.  I guess one could say that we had our own little book club.

I was the entertainer of the group.  I liked to do impressions of singers, and after we all got in bed at night, the girls would ask me to sing Ink Spots songs to lull them to sleep.

Donna’s parents would retire before we girls did, so we’d sit around talking for hours before going to bed.  Donna’s mother was a smoker, and one night we helped ourselves to her cigarettes.  We all tried smoking, blew some smoke rings and thought we were hot stuff.  I personally hated the taste but said if I married someone who smoked, then I’d learn to like it and would be a smoker, too.  Thank goodness I didn’t marry a smoker.  We thought we were putting something over on Donna’s mother.  The next morning after breakfast, as she extracted a cigarette from the pack, she said, “Shall I pass them around?”

One night after Donna’s parents had gone to bed, while we were sitting around talking and being silly, someone said “Oh, your mother’s army boots,” which led us to say all sorts of crazy things – “Oh, your aunt’s mustache wax” or “Oh, your uncle’s silk stockings,” and things of that nature; whereupon, Donna said “Let’s say only things that are true.”  She followed with “Oh, my father’s wooden leg.”  Of course, we all reminded her that she was only to say things that were true.  Donna got up from the table, went into her parents’ bedroom and came out with her father’s wooden leg.  Until then, we had no idea that he wasn’t walking around on his two original legs.

One evening we were all outside when a rather nice car drove up and three boys, a little older than ourselves, hopped out.  I thought the driver was kind of cute, and when he said that he owned the car, he became even more attractive.  His name was Roy.  He and I hit it off, and he came by every evening after that.  On one occasion, when we were all running outside, I slipped and fell rather hard on my hip.  With Roy’s assistance, I hobbled into the cabin and lay on a cot.  He sat beside me as we talked, and who should walk in but my parents.  It turned out that my mother’s new boss, who had just moved to town and hadn’t yet bought a house, was staying in one of the cabins.  My mother was horrified.  She told me that a nice young lady would never lie down in the presence of a boy.  After she left, my friends commiserated with me as I laid out my plans.  If my mother wouldn’t allow me to date Roy, I’d sneak date – that’s what I’d do.  When I returned home and talked to my mother, she said she knew Roy’s mother through business and she had no problem with my dating him.  With the intrigue gone, that relationship was soon over.

One of the girls suggested that we go skinny-dipping one night.  Three of us agreed to do it.  This idea was not shared with Donna’s parents.  We went to bed the usual time, but at around 2:00 a.m., three of us wrapped beach towels around our naked bodies and all six of us stealthily made our way to the pool.  We three daring ones dropped our towels and slid into the water while dodging the flashlight beams that the other three kept shining on us.  It was very exciting, not only the swimming, but the fear that we would be seen, not trusting our friends to keep their eyes peeled, and we weren’t sure they would warn us if anyone did appear.  A popular song at the time was “Her Bathing Suit Never Got Wet.”  I wrote my own verse:

Then one night, ‘twas down in Moonlight Park;
Three girls went swimming and it was so dark,
They went in and while some girls stood guard,
They found that swimming isn’t hard.