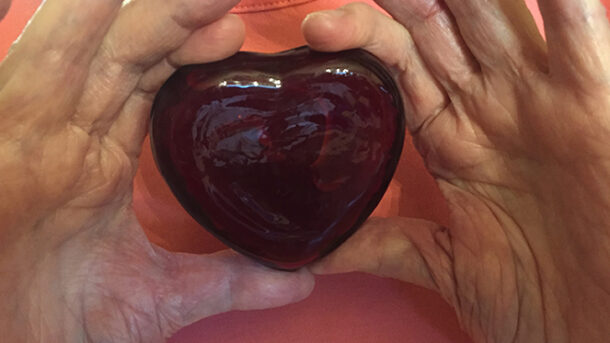 We didn’t recognize the signs. I was cutting down the length of my daily walks because I’d get winded; and while on vacation, the short walk across the sand, using walking sticks, did me in.  And when my legs swelled, despite my low-salt diet, I asked my nurse daughter, Michelle, if my heart could be the cause. She said it could.

We returned home from our Texas vacation on October 16th.  That night I had difficulty going to sleep because I was short of breath.  I considered waking Michelle, but decided to power through.  The next night I again had breathing difficulties.  This time I panicked, so I woke Michelle.  She asked if I wanted her to call 911.  That seemed to be a bit extreme for such a minor problem, but when I became more frightened, I said she should call.

When the paramedics arrived, they put me on a heart monitor, revealing that I was in atrial fibrillation with a heart rate of 160. Atrial fibrillation was a new heart rhythm for me, and Michelle breathed a sigh of relief, knowing that they could easily get my heart rate under control, relieving the cause of my distress.  As soon as I got into the ambulance,  was given oxygen, and a sedative and heart rate medication were administered via IV, I began to feel better. I was admitted to the hospital.

The next day, I was seen by a visiting cardiologist, Dr. Rowe, who lives in Utah.  I feel so fortunate to have been under his care.  He started me on Eliquis, a blood thinner that doesn’t have all the requirements associated with Warfarin; and a great drug for ventricular arrhythmias, Amiodarone.  Dr. Rowe performed an angiogram and inserted a stent close to one that I had received about fifteen years ago. Instead of going through the groin, Dr.Rowe went through my wrist.

After a week, I was released from the hospital.  It was great to be home until it was time for bed. I had difficulty getting to sleep because my breathing was labored – nothing like it had been before I went to the hospital, but it was scary for me.  My daughter Jeannette was visiting from California, and she volunteered to sleep with me if that would relax me, and this was a great help. I hadn’t had this problem in the hospital because I was on oxygen.  When I saw my GP, Dr. Meyers, he prescribed Trazodone for sleep.  He said that I should take melatonin until my prescription was filled.  I found that melatonin works for me, and not wanting to begin another medication with possible side effects, I never took the Trazodone.  I continue to take a melatonin each night.

Being relatively new to Oregon, I needed to find a local cardiologist.  Dr. Virgilio was highly recommended, and she was available.  I’m very pleased with Dr.Virgilio.  She explains everything in great detail, sometimes making drawings.  She emphasized the need to never miss taking my Eliquis, and she explained the value of the anti-dysrythmic drug I’ve been taking, Amiodarone.

On November 17, Dr. Virgilio performed cardioversion, an outpatiet procedure to stop the atrial fibrillation I’d been experiencing since my first symptoms. The procedure was successful, but I had a bad side effect from the Propofol, an anesthetic I’d had   previously without incident.  While lying in recovery, I began having a feeling of pin pricks on my arms and legs, followed by a feeling of burning on my skin, followed by extreme pain all over my body, some of the worst pain I’ve ever endured.  I couldn’t stand to be touched, and when the nurse removed the electrodes that had been stuck to my chest, I felt as though she was tearing out pieces of flesh.  Fortunately, the symptoms gradually subsided and were gone in an hour or two.

During a conversation with the anesthesiologist when we had time to kill prior to the cardioversion, I mentioned that my sister was a doctor.  He asked if she was living, and was incredulous that someone my age had a living older sister.  He said we obviously have good genes.  I told him that our parents died at 47 and 52 – but I added that they both smoked.  Then the anesthesiologist asked what kind of doctor my sister was.  I responded, “She’s an anesthesiologist.”

As I write this, I’m feeling good.  I’m back to exercising and taking daily walks.  I get stronger every day.

I’ve been fortunate in receiving good medical care throughout this ordeal.  Even though I would rather have been at home, my hospital stay was pleasant.  Also, I received nice ego boosts when several doctors and nurses told me that they had told hospital staff members who were coming to see me to not turn around and leave – “You’re in the right room.  She really is 91.”