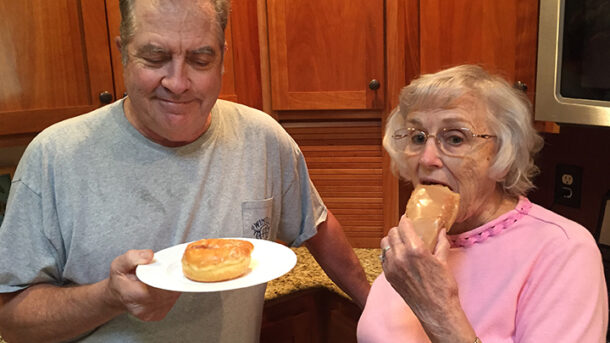 “When the cat’s away, the mice will play.”  Bob and I had an opportunity to check out this maxim, as Michelle – the sheriff, the mayor, the boss, the superintendent, or, in this instance, the cat – went to Yosemite National Park with friends for a week, and we were on our own.  Michelle and Bob are my daughter and son-in-law, and I live with them.

When Michelle is in charge of our food, it is delicious, but, more important, it’s nutritious.  You don’t see very much junk food in our house – until now.

The first evening, Bob said he likes to support local businesses, so it seemed fitting that we have pizza.  In truth, we sometimes indulge in pizza when Michelle is home.  The two pizzas provided one dinner and two lunches.   Bob, no stranger to the kitchen, prepared dinner the next two evenings.

The following day was my turn in the kitchen.  I baked cookies, and for dinner I prepared meatloaf and twice-baked potatoes.  Bob steamed vegetables to complete the meal.  The meatloaf and potatoes provided two dinners and two lunches.

Foodwise, we weren’t being terribly naughty, but that was about to change.  Our traditional Sunday brunch is usually omelets, salmon patties, turkey bacon, oven-fried potatoes, and the like.  This Sunday I suggested that brunch consist of donuts.  Bob was quick to agree and bought a half dozen assorted donuts plus some donut holes, which we managed to polish off in one day.  A few days later, Bob produced a recipe he wanted to try:  Watergate Salad, which is a misnomer.  It should be called Watergate Dessert.  The Watergate name is appropriate, though, as this dessert is criminal, the main ingredients being Cool Whip and pistachio instant pudding.  Bob didn’t agree that this wasn’t a healthful dish, pointing out that we used “Lite Cool Whip” and the dessert contained fruit:  pineapple and Mandarin oranges.  We managed to finish this treat before the boss returned.  Whether we’ll confess to her that we indulged in this sinful conglomeration remains to be seen.

Later Bob decided to support another local business, and he wanted to verify the new Oregon statute that allows take-out alcoholic beverages, so he ordered from a Mexican restaurant.  The marguerita was definitely to Bob’s liking, and the food supplied our last dinner and lunch before la policia returned.

The first two days, I didn’t take my daily walk.  Bob walks often, but I hadn’t realized that all I had to do was suggest we walk, and he and Banjo happily obliged.  So on the plus side, while Michelle was gone, I walked every day except two.

My grandson, Jacob, recommended a movie he thought we would enjoy:  Mitchells vs the Machines.  I shouldn’t have been surprised that a movie recommended by the father of a four-year-old would be animated.  Although I’m not crazy about animation, and am definitely not a sci-fy enthusiast, I agreed that we should follow through on Jake’s suggestion.   I rather enjoyed the film.  It had many funny moments.

In the past I have watched Dancing with the Stars, which is where I became acquainted with Nev Schulman, who hosts a TV show called Catfish.  I was aware that this show certainly isn’t for everyone, so I decided the best time to binge-watch it would be in Michelle’s absence, so that’s what I did.  Bob, being a normal human being, wasn’t a fan; however, he’d be in the living room from time to time during my watching marathon and would see bits and pieces, which led to some discussions between the two of us about the stupidity of people falling for these cons and the unconscionable actions of those implementing the cons.  These aren’t the scams performed by people in India, who fleece victims to the tune of hundreds of thousands of dollars.  Money seldom changes hands in this TV show, the main things stolen being affection and time.  As with all so-called “reality” shows, this one is obviously scripted, which is a good thing because that makes the show move along.  I haven’t quite finished the season of Catfish, so Michelle will need to indulge me.

To say that Bob, Banjo, and I missed Michelle would be an understatement.  We missed her like crazy.  At the same time, we were happy that she got to spend time with her good friends who worked with her in Arizona, and whom she hadn’t seen for over a year.  And we knew that we could text Michelle any time we had questions – she was just a click away.  We did take advantage of that option – maybe too often, but Michelle didn’t seem to mind.  She also kept photos of beautiful Yosemite coming to us regularly.

Bob wasn’t home when Michelle walked in the door on her return.  I got a big hug and then said, “I wonder if Banjo remembers you.”  Stupid question – Banjo ran in circles, bumping into Michelle again and again, while whimpering his message:  “I missed you soooo much.  Don’t leave me again.”  I feel the same way, Banjo.

All in all, Bob and I did a pretty fine job of fending for ourselves.  We didn’t starve   (actually, we each may have gained a few pounds); we’re still good friends; and neither of us got injured.  This was a great experience for us.  We had an adventurous week, which I think can be summed up in one word:  donuts.