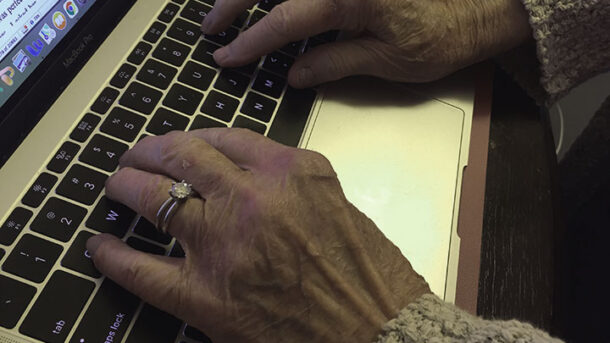 Her name was Lois, the same as mine, and, when we were teenagers, she was one of my best friends.  So when my husband and I attended a class reunion in Johnstown, Pennsylvania, we got together with Lois and Jim, her husband.  Jim was in the class ahead of us, and I had known of him but he hadn’t known me.  Every time my husband and I attended a reunion, we spent time with Lois and Jim, and we exchanged Christmas cards every year.  After Lois died a number of years ago, the Christmas card exchange continued.  Then, almost two years after my husband’s passing, Jim wrote a note on his Christmas card and included his email address.  This was how our email relationship began.

I realized at the outset that I was in for a treat, knowing that Jim had been a newspaper writer and still occasionally wrote columns for the local newspaper, and he certainly doesn’t disappoint.  His messages are full of reminiscent stories about our younger days, philosophical musings, testimonials of his faith, anecdotes and opinions.   Each time I see his email address in my inbox, I get a twinge of excitement, wondering what he’ll regale me with next.  I love reading his communications; likewise, he seems to enjoy what I write and doesn’t hesitate to tell me so.

A childhood friend invited me to visit her in West Virginia this past September and October, promising to drive to our hometown of Johnstown, where we could meet with Jim and another friend.  The four of us met for lunch, and it was so nice having a face-to-face conversation with Jim after almost a year of email communications.  When Jim and I found ourselves alone for a few minutes, he leaned in and gave me a kiss which, I must admit, was welcomed.  In the first email I sent to Jim after my return home, I told him that I planned to write about my trip East for my writers’ group and said, “I have a dilemma:  do I or do I not mention the kiss?”  He was very forthcoming in his answer, so I don’t think he’ll mind if I quote him verbatim:

Dear soft-lips:  You have to mention the kiss.  It undoubtedly had to have been the shortest kiss in your illustrious kissing background with those with more than a passing interest in your life.  I would like a second chance.  I know I can do better.  I truly was taken aback with the tenderness of that brief spontaneous exchange.  Actually, on my part the “move” was not that unplanned.  I had been thinking of such an exchange and pondered briefly discussing the possibility with you via email.  I decided “no”– — better to let nature run its course.

Right after receiving this email, I took a 2 1/2–week trip.  When I returned home, I found myself very busy and didn’t get around to emailing Jim until almost two months after I received his last email.  I apologized profusely, assuring him that I thought of him often; nevertheless, I received no response.  Then, conformity be damned, even though it was his turn to email me, I sent Jim an email on Christmas day.  Still not having heard from him, I sent another email on January 14th.  Okay, Jim, I get it – I made you wait almost two months for an email, but come on, I sent you three emails.  Doesn’t that count for something?

I decided to Google Jim to find out if he’d written any columns recently for the newspaper.  There was nothing new written by Jim, but something written about him.  According to his obituary, Jim “passed away peacefully the evening of January 6, 2016, as a consequence of heart failure,” after “being stricken” eight weeks prior.  So he never received any of my last three emails, and he’ll never get that second chance to “do better.”

I always say:  the internet gives us all sorts of information, some good and some bad.  I’ll take the bad with the good, though, because without the internet I would not have formed a warm friendship with this very special man. 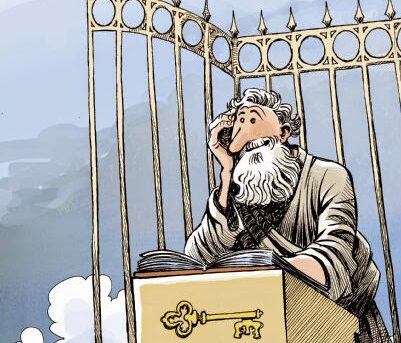 St. Peter rushed up to the Lord and said, “My books are quite a mess.
Could you please send out right away a very urgent SOS.”

Before the Lord could answer Pete, St. Francis said, “I’ve troubles, too.
The children all are crying and I really don’t know what to do.”

St. Michael said, “I’d like to add that Heaven doesn’t look so neat.
It seems an age since anyone has even swept the golden street.”

St. Anthony was next to speak:  “There’s one more thing, for Heaven’s sake:
The food they’re serving here of late gives me an awful tummy ache.”

The good Lord sat and thought and thought; the saints stood waiting breathlessly;
And then He turned to them and said, “We’ve problems up here, too, I see.”

“St. Michael thinks we need someone to tidy up the place a bit;
St. Francis feels the children need someone who’s sweet to baby-sit.”

“St. Peter wants a bookkeeper; St. Anthony, the best of cooks.”
Then all the saints said, “Please, Sir, while you’re choosing, pick someone with looks.”

And then the good Lord smiled, and there was a divine celestial glow.
“I know the perfect one, “He said, “Though she’ll be sorely missed below.”

Then as the angels sang, the Lord called Grandma to her heavenly home,
Where she looks down and watches us, no matter where we chance to roam.

She’s happy – she has lots to do.  She sweeps and dusts and sews and cooks;
She tells the children stories and she straightened out St. Peter’s books.

She made the angels all new robes and did so many other things;
And just the other day, I’m told, she mended St. Cecelia’s wings.

But she has not forgotten us; she looks down on us every day.
And someday we’ll be joining her in that Great Place so far away. 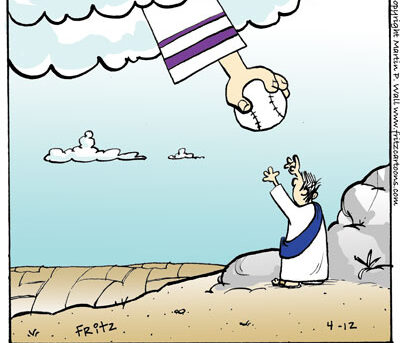 When our boy Lynn was four years old,
His Dad and I said, “Son,
We know that you love babies
And we’re going to soon have one.”

Lynn’s baby sis came on the scene
After a little while.
Lynn took one look at her and said,
With the biggest, happiest smile,

Lynn grew up to be successful;
He played ball and practiced law.
His physical appearance was
Almost without a flaw.

Then cancer ravaged his body,
With odds he couldn’t defy.
His family’s hearts were broken
As Lynn said his last good-bye.

The Lord looked down and all around,
And said “I need someone
To talk sports and play ball with me
When my busy day is done.”

Lynn said “I’m here for you, Lord,
But the big C did me in.”
The Lord said “Here with me
You’re absolutely perfect, Lynn.”

That’s how they got together
And became the best of friends.
Before too long, Lynn even learned
The way to make amends.

Lynn’s hearing what the Lord says
And his heart is filled with joy.
He tells about his memories
Of when he was a boy.

The Lord politely listens as
Lynn has a lot to say,
And, of course, the two of them find time
To play ball every day.

The other day Lynn tossed the ball,
And as the good Lord bunted,
He turned to Lynn and said, “You know,
You’re just the kind I wanted.” 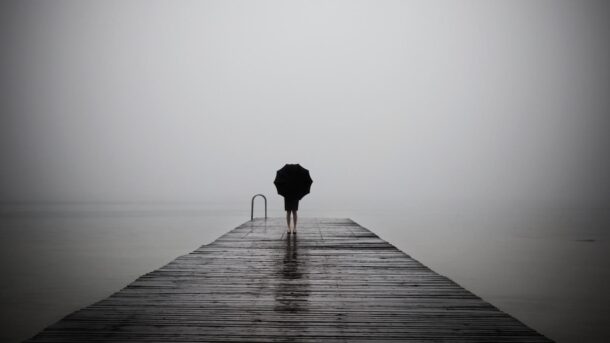 You whispered good-bye;
Then you faded from sight.
My days drift on by,
But my tears come at night.

My friends see me smile
And they think I’m all right.
I’m brave for a while,
But my tears come at night.

When I think of our love and devotion
My heart overflows with emotion.

You whispered good-bye;
Then you faded from sight.
My days drift on by,
But my tears come at night.

As I slip into bed
And I turn out the light,
Thoughts of you fill my head
As my tears come at night.